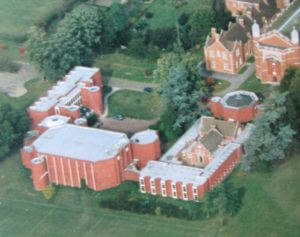 This December 2020 marks the 45th Anniversary of the official opening of Christ’s Hospital’s Theatre. During the cold winter of 1975, the School welcomed HRH Princess Alice, Duchess of Gloucester, for the long-awaited opening of the Christ’s Hospital Arts Centre. The occasion was held within the brand-new theatre, where she presented awards to the architect and builders, whilst also unveiling a plaque to commemorate the event.  This year has seen the first extensive refurbishment of the Theatre since this time and the building is due to reopen to audiences in 2021.

The original architectural structure was not only pioneering and innovative at the time, but also created by an award-winning architect, Professor William Howell. Sadly, he died before the Royal opening in 1975, but was able to be present for the initial unveiling in 1974. 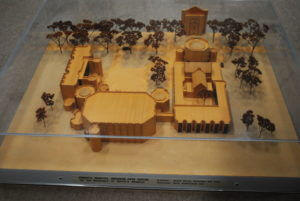 The building itself won the South East Region RIBA (Royal Institute of British Architects) prize and came 4th in the national competition, pushing the boundaries from classically designed theatres of the time. It enhanced and developed the ideas of flexibility of space. The CH Theatre design actually pre-dates the development of similar architectural layouts in professional spaces such as The National Theatre and at Stratford-Upon-Avon.

The Arts Centre was also commended for fitting well into the surrounding Edwardian buildings by the intelligent relationship to the geometry of the original designs of Sir Aston Webb (the architect of the Horsham site), specifically the octagonal turrets.

Drama was, and is, a popular activity at the school, and a staple of the CH community. Prior to the development of the Theatre, the pupils and staff would put on performances in locations such as Big School, Chapel and the Boarding Houses. House plays were held mainly in the Boarding Houses.

This love for theatre also extended to the girls at Hertford (until 1985). They regularly performed the story of the history of CH, re-enacting the key events after Edward VI founded the London school. 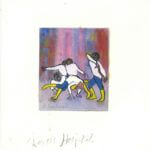 The first major production performed in the new theatre was Shakespeare’s The Tempest , a whole school play to celebrate the new building. The Theatre would become no stranger to the works of William Shakespeare as his plays were enjoyed throughout the years, including classics such as Romeo and Juliet in 2015. Most famously though was the production of Twelfth Night in 1978, by the Royal Shakespeare Company, joined by none other than a young Ian McKellen (before his knighthood). 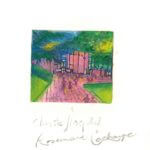 Originally designed as an Arts Centre, there has been a multiplicity of uses since it opened. There have been artists-in-residence and exhibitions, one artist of note being the prima ballerina Rosemarie Cockayne. In 1976 she led dance workshops with the pupils. She also used this time to create a body of artworks inspired by the boys in their theatrical environment (pictured).

Many big names have graced the CH theatre over the years, including Sir Tim Rice, Roger Allam (an Old Blue) and Michael Morpurgo. More recently, the theatre has been host to the comedy circuit with performances from famous stand-ups such as Jack Whitehall, Michael McIntyre and Russell Howard. 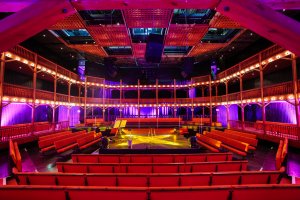 FUTURE OF THE THEATRE

2020 has seen the refurbishment of the award-winning theatre to update the space for today’s audiences. The ‘betterment project’ has sought to enhance the building’s performance use, for the pupils’ benefit, and aesthetic for the audiences. Developments include a new foyer and the redecoration of the auditorium.

In addition to this, the project has pushed forward the environmental endeavour of the school by adding major energy saving, and waste reducing elements. These include introducing LED lighting, and new toilet facilities estimated to save around 100,000 litres of water per year.

During one of the toughest years for British theatres, the pupils have been working extremely hard for their upcoming drama exam performances. The Second Form, LE and Deps will start rehearsals shortly for small-scale performances, due to be held in the Lent and Summer terms.

The CH Theatre really looks forward to welcoming back its supportive audiences, as soon as allowed! They will be sending out information on social media, whilst also contacting all those on their mailing list when the new programme is released in 2021.

(With thanks to the CH Museum and Drama Department)