Tony was born on 25th November 1928 in Hampton, London to Thomas and Evelyn Roberts, who lived in Twickenham. He had an older brother, Keith, and a younger sister, Jane, both now deceased. All three children attended Christ’s Hospital on scholarships. Tony enjoyed returning many times to Christ’s Hospital for reunions.

Tony went on to study engineering at Imperial College, London, becoming an engineer and inventor – a very creative man.

He married Gillian Barnett in 1952 and they spent six years together in Canada, where their four children were born, while working on various engineering projects. The family returned to the UK in 1959, and Tony then worked for Plessey in Romsey, Hampshire and the family moved into an old house nearby in 1960.

Tony invented the first electronic weighing scales, or balances, but Plessey did not want to develop this idea, so he set up his own company, CI Electronics Ltd, with his schoolfriend, Michael Stuart, in 1965 with Plessey’s blessing. In 1967 Tony was presented with the Institute of Inventors Award by Tony Benn, who was then the Minister for Technology.

Tony ran the company along benevolent lines, being very kind to his staff, especially when they were in trouble of any kind. He was extremely forthright in his business dealings, though, once being overheard saying to ICI that “It’s companies like yours which put companies like ours out of business” when he was chasing a late payment. His method of unwinding after a day’s work was to roll up his sleeves in the garden.

Some words from Romano, a work colleague:

“I have fond memories of working with Tony, developing ideas and products for his very innovative technical company. His mind was always at work to find ways to make things better. A true intuitive engineer at heart, he managed to balance the running of the firm as well as leading projects and solving technical problems. His leadership helped the company survive difficult times and ensure its prosperity thanks to which many people enjoyed a stable and fulfilling employment. During all those years Tony also found the time to ensure that the Old Barns Trust at Michelmersh continued to provide a focus point for the villagers and visitors.”

Tony took a great deal of interest in the village and was a real pillar of the community, working hard with close neighbours to keep any developers out by buying land, which subsequently became a Conservation Area to keep the local newts and bats safe, too. As a result, the old part of the village remains unchanged since the early 1960s, which rather rebounded on Tony when he applied for permission to build an extension on his house and it was denied!

Tony was very interested in the countryside, belonging to the Save the British Countryside group, CPRE. A passion of his was to improve public transport – he was very irritated at the sight of empty buses! He was a firm believer that transport should be available exactly where and when it was needed.

Tony never really retired from the company, going into the office once a week until he could no longer drive. He and Jill were never profligate and didn’t throw anything away. Tony installed central heating in his home when the family moved in but everyone agreed that it always seemed to be freezing cold. Tony had so much energy that he was always “warm as toast!”

Tony and Jill needed care as their health declined and their twins, Elaine and Jonny moved back to the family home to give support from 2017. Then when their care needs increased, they moved to care home facilities, eventually both going into Braemar Lodge, Salisbury, one of the best care homes in England, in 2018.

Tony is survived by his four children, Caroline, Adrian, Jonathan and Elaine, and 5 grandchildren and 5 great-grandchildren. 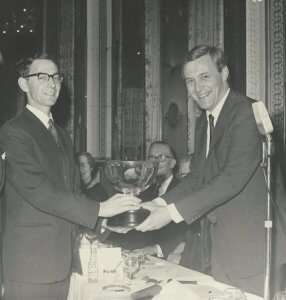 1967  – Tony is presented with the Institute of Inventors Award