I have recently been notified by his widow, Marie, that D.L.Warner – Prep School 1953-1955 and Pe. A. 1955-1962 died on 17th March 2021 in New Jersey, USA, at the age of 77 having just had his birthday on the 9th March.  David Lawrence Warner was known as David to some, ‘Jack’ to many and Lawrie to his parents and some older friends.  He was active in the Old Blues Rugby Club after leaving school, and he and I spent some time together when I was at The City University in London between 1962 and 1965 including drinking at the Alexander Palace and regular games of darts and Cribbage with his parents at their home nearby in Muswell Hill.

He was one of four of us who went on a memorable holiday together to Southern Ireland for two weeks in the summer of 1966, driving his mother’s Morris Oxford car, who had generously loaned it to us for the trip.  (Attached picture is from that holiday and yes, he did ride the horse).  In the early 1970s he shared a flat in London with other Old Blues and then survived a serious brain aneurysm before emigrating to the USA to work, where he met and married Marie who already had two small children, and they became his family.  Those children each married and had two daughters, and much of his later correspondence was about his four grand-daughters and how they were doing – he was clearly a proud and happy family man.  The rest of his correspondence was complaining about Donald Trump.  I last saw him in about 1980/81 when he and Marie came over to the UK to visit his mother who had retired to Dorset – we met there – but we kept in touch by letter each Christmas over the next 40 years. They lived in New Jersey, for many years by a ‘Harbor’ in Neptune and since 2005, in a retirement complex in Ocean Township.

I believe he worked in accountancy for most of his working life, but he did retrain as a ‘Realtor’ (estate agent) in later working life.  It is also my understanding that in 2017 he finally became a Citizen of the USA.  I know he had several health issues in the past few years and my last letter from him was at Christmas 2021 when he said his oncologist had passed him off for another twelve months and his surgeon thought he would live until 90.

Sadly they were both wrong.  Just a few weeks after that Christmas he collapsed and was found to have yet another cancer – his third in as many years.  In spite of all the medical efforts to operate and save him he sadly died on the 17th March 2021. 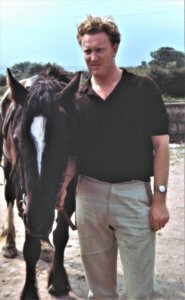