Having triumphed in the South East Regional for the second year running, the Ethics Cup team travelled to St Andrews for the National Finals at half term. The team had been working extremely hard in preparation and had beaten Worth in a friendly match in the weeks leading up to the tournament.

CH were drawn in a group with Tytherington School (Winners of the West Midlands Regional) and Hermitage Academy (Runners up in the Glasgow Regional). CH performed extremely well and made a comfortable start with their presentation on ‘Lookism and Free Cosmetic Surgery’ arguing that although some people may be disadvantaged because they are not conventionally attractive, this does not mean the government should intervene by providing free cosmetic procedures. With their argument, CH beat Tytherington 3-0. This was followed by another clear victory over Hermitage Academy, as CH defended the proposal that court proceedings should be streamed online, with sensible measures taken to avoid sensationalism. 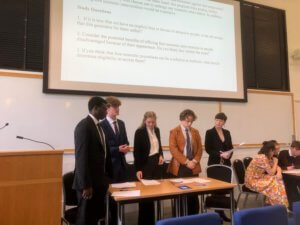 The team progressed as the highest scoring school to the semi-finals, where they met Hammond School and defended the appropriate use of anger in politics. The team drew a sensitive distinction between anger and aggression, which impressed the judges, and progressed to the final with their third 3-0 win of the day. Spirits were high as the team discovered that Worth would be their opponents in the final. No matter the outcome, the Cup would be coming back to Sussex.

The final was judged by three distinguished guests – Willie Rennie, MSP for North-East Fife; Professor Julia Driver, a renowned moral philosopher; and Sally Mapstone, Principal and Vice-Chancellor of St Andrews University. CH knew they had a hard task when they drew the case ‘Moral Risk’, a cutting-edge topic in ethics. They set out a clear case, with the discussion focused on the concept of a moral framework and whether individuals can be blamed if they act consistently within their moral framework. However, Worth argued very well on their topic of working from home and reasonable adjustments for disabilities, and ultimately triumphed over us, 2-1.

The team were disappointed not to be returning with the Cup itself but were outstanding competitors and drove up the quality of the competition overall.

The Ethics Cup is a tournament in which teams of high school students match wits with each other discussing ethical issues of public concern. It’s not a debating competition and isn’t won by proving the opposing side wrong. Rather, it’s a collaborative discussion, and the team that best displays the virtues of insightfulness, thoughtfulness and civility takes home the ultimate prize, the cup itself.