At the end of term we bade farewell to one of our most highly respected and longest serving members of staff, Mr. Adrian West, who has taught piano at CH since September 1986. 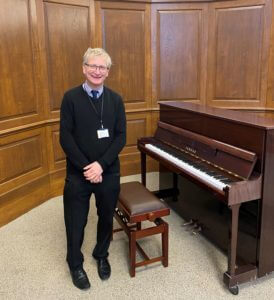 He was employed by the then Director of Music, Peter Allwood, to accompany some of the House Singing Competition entries (Adrian recalls his first experience of CH music was Maine B singing en masse!). Such was his calibre, he was soon offered a position as a piano teacher, a post he relinquishes now after a remarkable 103 terms. With his gentle and encouraging approach, Adrian has inspired countless numbers of pupils over the years, including two current members of staff when they were pupils here.

Adrian was presented with a variety of gifts to send him on his way, and the Head Teacher gave a tribute and vote of thanks. Adrian spoke movingly about his love of Christ’s Hospital’s unique ethos. He will be sorely missed by pupils and colleagues alike, and we wish him a long and happy retirement. At least he will now have a bit more time to dedicate to following his beloved Brighton & Hove Albion!