Last term, Grecian (year 13) pupil Alex was lucky enough to play for the Saxon Tigers in the U17s Futures Cup 2021, which is run by England Hockey.

Alex has played county hockey representing Surrey since U14.  At the end of the U16 year, he was nominated from his county training to join one of four regional centres in the country, where he went on to be selected for the Futures Cup tournament. His team did amazingly well, finishing runners up to Mercia Lynx 1-2 in the final. He now plays hockey for Horsham Men’s 1s in the South East Premier Division.

“Hockey has been a huge part of my life for the last eight to nine years. I think it’s a great sport that unfortunately isn’t very popular for boys. It’s been great seeing more boys play hockey in the younger years at CH, and I hope that in the future hockey can continue becoming a more competitive sport for boys. The support I have received from CH has benefited my performance and I am very grateful for the School being flexible in allowing me to play outside of school (for Sevenoaks U18s and Horsham Men’s 1s).”  Alex, GR/Year 13 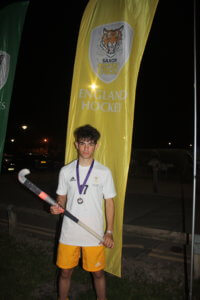