On 29 and 30 April, a group of 10 DG (Year 12) pupils won the South-East regional round of the John Stuart Mill Cup. The Mill Cup is a philosophy discussion competition, similar to debating, in which two teams analyse contemporary ethical problems and aim to work collaboratively through a process of presentation, questioning and response. 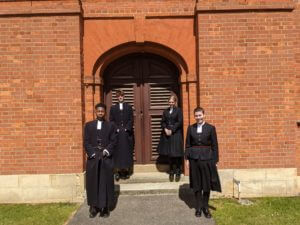 The Mill Cup is organised by the University of St Andrews, but the regional round was hosted (virtually) by King’s College London. 12 schools (listed below) of a very high calibre were in attendance and the CH team won every match played. They beat Lord Wandsworth College, Kingsbury High, Simon Langton School for Girls in the semi-final, and St Paul’s Girls in the final. (St Paul’s and Langton also progressed to the national finals, as they finished 2nd and 3rd respectively).

The team discussed a broad range of topics, including: the ethics of public nudity, the right to be forgotten on the internet, retribution in the criminal justice system and the repatriation of foreign fighters.

The pupils’ teacher (of Theology and Philosophy), Mr. Daniel Calder, said: ‘The pupils have been rewarded for their steadfast commitment to the team, squeezing in practice during the week and making time to independently research the knotty ethical problems formulated by St Andrews. They displayed intellectual rigour, clarity of thought, and unswerving cool-headedness during the competition. Judges commented in particular on the team’s ability to handle questions (posed by academics from the University of London) with both intelligence and open-mindedness.’

A few comments from the team:

‘I felt we got so much stronger as a team throughout the competition so far; our philosophy is much improved as a result and we are all very excited for nationals.’ Niamh

‘Engaging in discussion of such paramount importance was hugely stimulating and enjoyable. We all felt a huge sense of achievement in winning the regional round and competing against schools with such interesting views.’ Gabriel

‘I loved discussing such controversial moral dilemmas with members from other schools.’ Kit

Well done to all the pupils involved, who were: Gabriel, Amen, Yalin, Anita, Will, Toga, Kit, Charles, Rowan and Niamh.

The schools competing were: