Michael had a long and fruitful life in Christian ministry, as leader, teacher, and author, becoming General Director of OMF International, and Principal of London Bible College, after working with students in UK and Japan.

He was born in Cardiff and entered CH on a scholarship just before the war. He soon discovered that being the star pupil at primary school did not mean he would shine at CH! But it was there that he found his life’s purpose. Here is own description of his conversion whilst at school: ‘.. two weeks after World War II started, I began attending the school’s Christian Union. After four years of Sunday meetings, I came to Christ through Alfred Schultes, a German pastor of the Confessing Church. We boys listened to this “enemy” because he had suffered, having been imprisoned by Hitler with Martin Niemöller and later interned by us. In broken English he expounded 1 John, “Gott is light, Gott is luff, Gott is laif !” I realized that while God’s holiness reveals my sinfulness, Christ’s love in dying for me brings me forgiveness of sin and new life. I have felt indebted to German Christians ever since.’

He carried his faith through his time at Cambridge, studying Natural Sciences, and becoming President of the Christian Union. He stayed on to study at Ridley Hall but did not eventually enter the Anglican ministry because of an issue of conscience over infant baptism. However he then began working for IVF (Inter-Varsity Fellowship, now UCCF), training students in leadership and personal evangelism. After marriage to Valerie they were sent by OMF to do similar work with students in Japan. He became General Director of the mission in 1969, until 1980, when he was invited to become Principal of London Bible College. In 1990 he moved to become Professor of Mission Studies at Regent College, Vancouver. On returning to the UK he worked for the International Fellowship of Evangelical Students until 1998.

During the course of his life he wrote over 20 books. His passion for student mission and the growth of the church worldwide continued into retirement. Through his influence on the lives of so many of his readers, students he taught, people who themselves became missionaries, and leaders he inspired, it is no exaggeration to say that he had a profound effect on Christian mission throughout the world. His life was a lived example of the Christian principles upon which the school was founded in 1552. 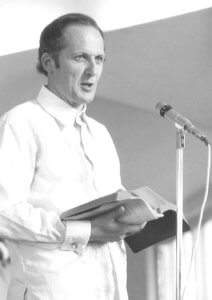