What was it like coming to CH and how did you adapt? 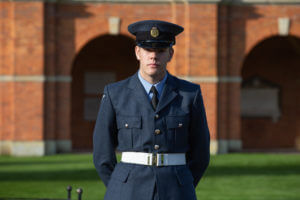 The idea of CH as a potential school for me actually came years before I was born. My parents have been doing the Lord Mayor`s show for decades with their army band, so they saw the CH band and could not help but be amazed by the size and the standard. When it came to picking my secondary school, my parents asked if I wanted to consider CH. I attended an open day and immediately took a fancy to the School and seeing the band really sealed the deal.

I attended the overnight assessment for second form entry and thoroughly enjoyed it. I was lucky enough the be assessed in Peele B, where I would later join, and had a really positive experience with both the staff and the pupils who had volunteered to help out. I was given a place for second form entry but in the end decided to defer it to LE.

Coming from a small prep school with a student body of about 200, I was worried about being overwhelmed by CH, but I was very fortunate in that my house mates were welcoming and helpful, and I quickly got into the swing of things.

What activities have you enjoyed at CH and what have you accomplished that you are proud of?

Rugby has played a massive role in my time at CH; it was a great way of meeting people when I first arrived, as I knew those around shared a common love of the sport. In fact, I actually skipped my orientation day as the rugby team had a pre-season, which was perfect for me. It remained a massive part of my life right up to Grecians (Year 13), where I received the opportunity to captain the first XV.

I discovered fives in UF (Year 10) which was fantastic as I was a rubbish footballer and needed something else to do. A personal highlight for me would be this year`s (2019-2020) regional championships, in which I was fortunate to win the singles title.

The CCF was certainly a highlight of my GE, I had the opportunity to fly with the RAF section which is truly something special. I was appointed head cadet in Grecians which helped massively with my management of both myself and other people.

Finally, the band was possibly my favourite aspect of CH life; to play with such terrific musicians was always a blast and Mr Whittingham was an exceptional band master. To be appointed as band captain was truly something special.

Tell us about your academic achievements and what you’ve enjoyed about your CH education.

I studied music, philosophy and history; all have been thoroughly enjoyable.

The support has been fantastic. I was never a top academic but I still received a great amount of support which allowed me to achieve the best that I could, which has allowed me to pursue my career without fear of grades getting in the way, which is something I am very grateful for.

I have an offer to study jazz bass at the Guildhall School of music in September (2020). I am sure that if it weren`t for CH, I wouldn’t have got my place. Playing every day has really improved my playing ability. The jazz side of the music department has been instrumental in my development. Weekly big band rehearsals were great for developing sight reading, while the senior jazz ensemble was really helpful for developing skills such as improvisation and adapting to each other and changing the music to suit individual situations. Within the music A level, I was given the freedom to pursue the jazz side in many aspects of the course. Whilst in lockdown, I have been receiving jazz harmony lessons from Mr Barry, our visiting teacher of jazz. The support from CH has been fantastic.

What are your happiest memories from CH?

My happiest memories were probably my first Lord Mayor`s show, which I got to do with my parents, our rugby season during DG (Year 12), where we managed to reach the schools plate semi-final and any of the big band concerts.

I can`t really pick anything I will miss the most, everything about CH contributed to the overall experience, and it`s that experience that I will miss and treasure for the rest of my life.