Peter Martin [Lamb A 1962-70] died in Myton Hospice, Warwick, on April 19th. He was born in London, in Westminster Hospital, in August 1951, the youngest of 3 brothers, and grew up in Southfields in south London. From Macaulay School, Clapham, he won a place at Christ’s Hospital. 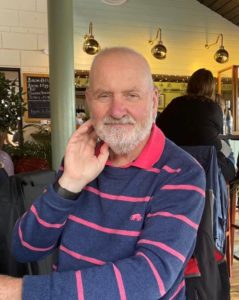 He became  “a colourful house captain” of Lamb A, [The Blue, September 1970] ; and played rugby, and cricket for the school 2nd XI. After CH he began an Architecture course at Oxford Polytechnic,  but switched to the Courtauld Institute to do a degree in the History of Fine Art and Architecture. He played rugby for the Old Blues and for a junior team at Rosslyn Park.

After graduating he spent a very dull year or two as a civil servant in the Department of Pensions. Followed by two enjoyable years working in Copenhagen for the British Council. He learnt passable Danish, and travelled extensively in the country administering exams and lecturing on aspects of British history and culture.  Thereafter he worked for a branch of the NHS in Bristol, looking at equivalences for professional, medical qualifications; and then in Norfolk at the CITB. In 1987 he married Alice, née Lyon, and with their two daughters, Minty and Rosie, they lived at Welford-on-Avon, as Peter worked as CEO for LANTRA, the National Training Organisation for the Land Based Industries.

Peter was a rugby referee, a local councillor, and in retirement a part-time guide for National Trust properties. He knew a lot about English porcelain. He played golf here and overseas. He enjoyed knocking down significant bits of successive houses and rebuilding. He organised a couple of Old Blues West Midlands gatherings in the [excellent] pub at Welford. He fought an aggressive brain tumour for a year, and was well for most of that time; continuing to play golf, and to argue about politics, or indeed anything else. There will be a celebration of his life at Compton Verney on May 16th. Our thoughts and prayers are with his wife Alice and their daughters.