On 12 October, the esteemed actor Rory Kinnear delivered a lecture in person to our Grecian (Year 13) pupils, as well as to some DG/Year 12s and members of staff. 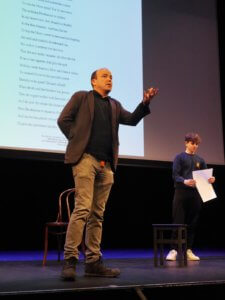 The lecture, entitled A Life on Stage and Screen, took place live in the theatre and was part of this term’s Ridley lecture series.

Rory Kinnear is an English actor and playwright who has worked with the Royal Shakespeare Company and the Royal National Theatre. In 2014, he won the Olivier Award for Best Actor for his portrayal of William Shakespeare’s villain Iago in the National Theatre production of Othello. He is known for playing Bill Tanner in the James Bond films Quantum of Solace, Skyfall, Spectre and No Time to Die.

Pupils very much enjoyed the talk, with Francesca (GE/Year 11) commenting to say “it was a fascinating and incredible opportunity”.