Throughout lockdown and into this term, we have enjoyed a number of ‘virtual’ concerts featuring our talented pupils across the age range as soloists. This term, we have heard our various choirs (12 groups rehearsing every week, no less!) leading the year group Chapel services that take place throughout each week. Sunday 29 December saw our first concert in the presence of a live audience (made up of staff and pupils only) since March – and what an occasion it was! 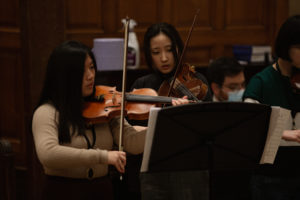 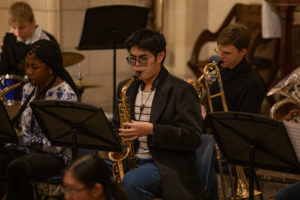 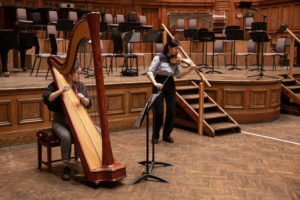 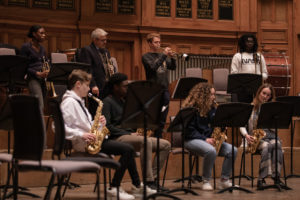 The School Concert is traditionally a showcase for our larger senior ensembles. This year, due to Covid restrictions, we held the concert in two parts: the first half in Chapel with Deps (Year 12) performing, followed by Grecians (Year 13) in Big School. The Deps’ String Consort opened with a sprightly, galloping first movement of Brandenburg 3, followed by a smaller group playing an arrangement for string quintet of Schubert’s Ave Maria, featuring Harry (Mid-A) as cello soloist. The DG Band were next, conducted for the first time by our magnificent new Band Director, Mr Carter. The fourth movement, Fantasia on ‘Dargason’ from Holst’s Second Suite in F, juxtaposes a jaunty dance figure with an indulgent melody, the latter played with real shape by Ruby (Th-B). The Deps’ Big Band closed the first part with Switch In Time by Sammy Nestico, featuring Ryan (Mid-A/B) on the trombone. 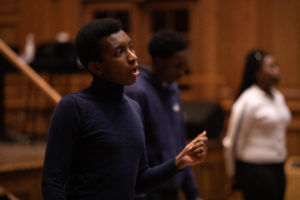 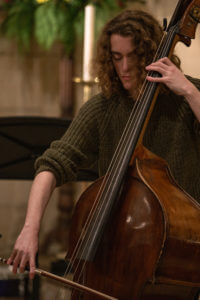 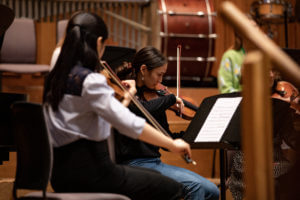 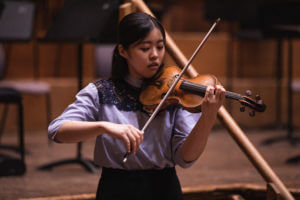 We then moved to Big School for performances by the Grecians (Year 13). Schola opened the batting with Viva la musica by Ivan Eröd, a miniature outburst to celebrate the return of music to the concert platform, followed by Bob Chilcott’s sublime, poignant arrangement of Londonderry Air.

As well as the ensembles, this part of the concert featured some Grecian soloists. Mutsuki (Gr-W) gave a hugely impressive account of the intricate first movement of Bach’s Italian concerto BWV 971 on the Steinway D in Big School. Tomisin (Gr-E) then took to the piano, accompanied by a small orchestral ensemble, to give a wonderfully sensitive and nuanced performance of the Adagio from Beethoven’s Piano Concerto No. 5. Mutsuki, this time on the violin, gave us a Massanet’s soaring Meditation, accompanied masterfully by Kirsten (Gr-W), our resident harp virtuoso. 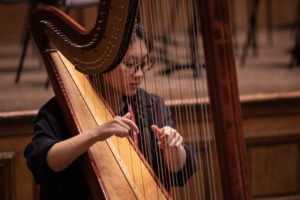 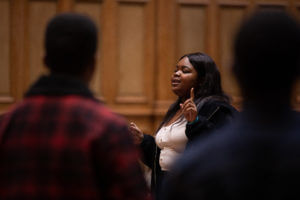 More Holst for Marching Band, this time two engaging movements (Chaconne and March) from the Second Suite in E flat played by the Grecians’ Band Consort. We then heard from our Gospel Choir, led by Esther (Gr-E), accompanied by Max (Gr-E), singing their own inventive and accomplished arrangement of the Gospel classic Lift up your voices and sing. The final works were given by the Grecians’ Big Band. Despite the large, well-lit room, this group managed to convey the essence of a swanky jazz club with Neil Hefti’s Lil’ Darlin’ and Glenn Miller’s In the mood. A particular highlight was the conversational saxophone duet between the ever-stylish James (Gr-W) and the versatile Laura (Gr-W), who only a few minutes before had been central to the Beethoven on the violin.

Bravo to all the performers: a real tour-de-force, and an excellent demonstration that CH music continues to thrive even under the present restrictions. Thanks also to our warm, supportive audience, and to my brilliant team of colleagues in the Music School who have led these groups and many others – bands, choirs, and orchestras for every year group – with their characteristic optimism, rigour, and inspiration.