I grew up in East London and later moved to Essex. My mother heard about CH through a family friend and we first talked about it when I was in Year 5. Initially, I didn’t want to go, because of the uniform, or march into lunch every day! 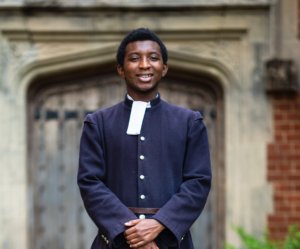 Some of the teachers at the state school I attended encouraged me to go. Without wanting to sound arrogant, they believed I had academic potential. So, I decided to apply and joined CH in LE (Year 9). It took me a while to adjust to life at a boarding school. I’m sure most pupils have times early on when they don’t think it’s for them, but you soon get used to it.

Outside of academic subjects, I was involved in the drama production of West Side Story, which was fun and in my opinion one of the best plays at the School in recent years. However, my main interest has been music. Playing the flute and piccolo relaxes me and performing regularly at School has improved my technique dramatically. I’ve loved being in the Band and singing with Chapel and Gospel choirs too and having not thought much of marching bands before coming here, I now view it as something very special.

I’m lucky in that not many people play the piccolo, which has given me plenty of opportunities to perform at events both in and out of School. When you’re involved in things like St Matthew’s Day in London, it’s interesting to see people’s reaction. We often go viral on social media because of the uniform. Walking through the capital and travelling on public transport gives you a sense of pride in CH, yet it’s also bizarre to have people stare at you. It reminds you of the uniqueness of the School and how important its traditions are, so I hope that uniqueness stays long into the future. During Covid, we weren’t wearing Housey while at School. To be honest, some were not as eager as others to get back into it again. But I was pleased to see it back, as it has an aura about it.

I’m going to Cardiff University to study Law and French and hopefully in my third year I can spend a year in France. After that, I will decide whether I want to stay in the UK or move elsewhere. I would love to visit Ireland, New Zealand or Canada, as they are naturally beautiful countries with welcoming people.