I’ve been at Christ’s Hospital since Second Form/Year 7, so it feels strange to be moving on, as it has been my life for seven years. 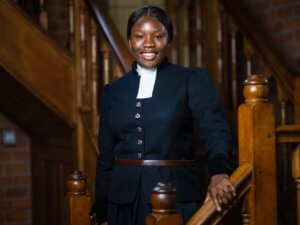 My mum always said that if she had the opportunity when she was young, she would have wanted to go to boarding school because of the opportunities they offer. But it didn’t happen for her. So, she wanted to give me that chance.

I first visited on an Open Day, and what struck me was how pretty it was. Everyone was so nice as they guided us around the site. I can’t remember the name of our guide, but they were really confident around my parents. They told us about their own story and it resonated with my parents, because they had a similar background. Coming from Dagenham and being given the amazing opportunity to attend a school like CH was fascinating. Many of my friends back home are not at college or university, so to be here and have a chance of progressing to a top university is exciting.

One of the things that most attracted me was the diversity of the pupils. I have a much broader friendship base now. My friends at home are black or Asian, but here people all come together. I have friends from America, Ukraine, China and all over the world. The School has given me a different perspective, as no matter where you are from, we are all here to achieve success. I feel reassured that not everyone in the world is against you. Where I’m from, you can have that mindset as it’s normal to be influenced by the opinion of those around you.

I have been involved with the Afro-Caribbean Society (ACS) since it was formed in 2020. In June, I helped organise a multi-cultural fashion show, with pupils talking about their favourite cultural clothing. There were skits and dances, and the audience was treated to African and Caribbean food too. A couple of us came up with the idea for the show and planned it for a whole term, working hard behind the scenes, talking to teachers about what was and wasn’t possible. So, when it happened, it was a relief that it went so well!

I hope the ACS is the start of something new and exciting, helping to highlight black excellence to the wider School community. In time, I hope it will evolve in the hands of others, who can take it on to bigger and better things. Already, we have strengthened connections with some universities, while several Old Blues have returned to speak to pupils about life after CH.

I enjoy hearing from Old Blues about their journey after CH. When you’re at School, you go through the years one-by-one in an orderly fashion, but in the real world, there is no normal path and it’s important for us to hear these different journeys. There are many routes to get to where you want to be and achieve your goals. When I hear from Old Blues, it inspires me. We have a good Visiting Speakers programme, but when people come back when they are younger, perhaps only 25 – 30 years old, I find pupils connect with them better as their memories of the School are recent.

I’m going to Loughborough to do an Art and Design Foundation, but my dream is to become a pilot. First, I’d like to rack up hours as a commercial pilot, then enter the private sector. I have flown with the RAF through the School, as well as on summer courses at Royal Holloway University. I also spent a summer as an apprentice at British Airways, where I tried flight simulators and learned the ways of BA behind-the-scenes. My mum works in the aviation sector, so I’ve always been exposed to flying. She travels a lot too and I want to make that not only my hobby, but my job!