I’ve been a day pupil, as I live nearby in Horsham. I used to think I was missing out by not being a boarder, but I missed less than I thought. Even as a day pupil, there have been many times when I’ve still been at School at 9 or 10pm, getting involved in events and activities. You do miss out on some of the social aspects of CH life on Sundays, but it’s also been nice to have a change of scenery and see my family and friends outside of School. 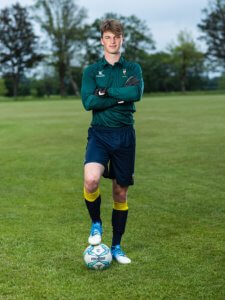 I’ve enjoyed Sport during my time at CH, playing for rugby, football and cricket teams. I had never played rugby before coming to the School, but found I really enjoyed it. However, football has been my personal highlight, as I joined the first team back in Year 10. I learned a lot from Mr Deller, who is stepping down from the football role this year, and some of the more experienced players.

I’m a goalkeeper, as I was never a great outfield player, but do have good hand/eye coordination. In my first season with the first team, we had a fantastic squad and an inspirational captain who drove us on. Our best result was beating Brighton College 2-1 away. My memories of that match will stay with me for many years. The School also hosts an annual Old Blues match, which is good fun. There’s a guy called Bob who proudly tells everyone how he first introduced football to CH, and now it’s grown to be perhaps the most popular boys’ sport here.

If I had one regret about my time, it would be not getting involved in music. My advice to anybody joining the School would be to learn an instrument and join the Band, because it’s incredible.

It’s been a strange year, as we’ve not been able to experience all the events that Grecians would usually enjoy, because of Covid. The Leavers’ Service would normally be attended by the whole School, but it was scaled down this year. It’s still emotional though, belting out the hymns one final time. As your time at CH comes to an end, you realise how much you’re going to miss it.

I hope to continue playing sport at the University at Leeds, where I will study Economics, one of my A-level choices.