Three CCF cadets attended and passed the Senior Cadet Instructor Course during half term, and one of them was named ‘top student’.

The Senior Cadet Instructor Course is a course run by the British Army for senior cadets, so this is a big achievement for our cadets, Kinda, Ella and Louise, who are all Deputy Grecians (Year 12 pupils). All three did extremely well, with Ella being named ‘top student’. They were up against cadets from across the south-east, some of whom have been cadets since they were 12, meaning they had a couple of years’ advantage.

They have all been in CCF since the UF (Year 10) in 2019 and although they have had a difficult cadet career due to COVID, this did not stop them from making the most of their time with the contingent. Ella is due to become our contingent senior cadet from September, while Kinda will be head of the New Cadre Section and Louise head of the Army Section.

They should all be very proud of their achievements! 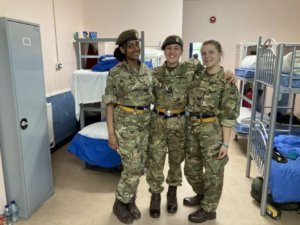