Fundraising continues for the third FCH Blue Fund pupil. The FCH have currently raised £16,973 (c. $23,037) towards their third target.

“My favourite thing about my boarding house is the people. Col UF are all wonderful people and I love spending time with them, even if they can be a bit too loud sometimes. We did a corridor project this term, which I really enjoyed. I was the leader of the first half, which was a voiced animatic (storyboard). Recording was super fun and I think the animatic turned out pretty well.

I’ve been continuing to learn guitar, and even though lessons are now online, it’s as good as it’s always been. One of my other favourite hobbies is drawing. It’s really fun to express my ideas and the drawing process is super satisfying. It’s also a form of escapism so I can relax for a while.

We’ve also been playing strategy games, we played Mafia the first time (which I won every game of!) and since then we’ve been preparing for a campaign, which I’m really excited to play. I love Dungeons and Dragons and I really want to be a part of a long-term campaign, because it’s so much fun. Getting to become my character is really enjoyable.

Recently I got into playing Minecraft and it’s been amazing. Although I’m still getting used to the controls after playing a different version for six years, it’s super fun.

The subject I’ve most improved in is definitely Latin. Considering I didn’t know any Latin before CH and I’m taking my Latin GCSE this year, I think I can say with confidence I’ve improved greatly over the past few years.

I’m not sure what I’m looking forward to this term. Everything’s constantly changing so I don’t know what’s going to happen and how much will be cancelled. So I guess I look forward to things getting back to normal.” 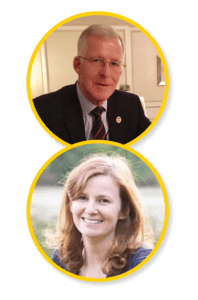 “One of the great things about the FCH Blue Fund is that, through it, Old Blues In the USA can collectively enable selected children to attend Christ’s Hospital, with every contributor knowing, no matter their amount, that they have had a direct impact on making that life-changing experience possible for those children.”
George Matcham (PeB 63-70)

“I am particularly excited about the US Blue Fund as it gives all Old Blues the opportunity to directly participate in the education of one child.  Many of us do not have the means to become a Governor but the Blue Fund enables us to have a ‘time share’ in becoming one.”
Belinda Reiser (4s, ColA 79-86)

You can give another child like Daisy the gift of a CH education. Tax-efficient donations from US taxpayers can be made via the Friends of Christ’s Hospital (FCH) to support the Blue Fund.  You can make a gift online or complete the Gift Form and return to Friends of Christ’s Hospital, PO Box 5171, Lancaster, PA 17606, or send a scanned copy to Keith Worker at kworker3@gmail.com

or visit Giving From the USA to find out more about the FCH.