An artefact dated 1703 from Christ’s Hospital has been dug up over 220 miles away in a Cornish resident’s garden.

Brian Sellick, who lives near Torpoint in Cornwall, dug the medallion-like object up in his garden about 10 years ago and had always wondered what it was. Until recently that is, when he googled the words which appear on the object – Christ’s Hospital. Up popped our website and lo and behold, the CH crest matched the one on the object Mr Sellick had dug up. He emailed us to find out more and luckily our museum knew exactly what the object was. 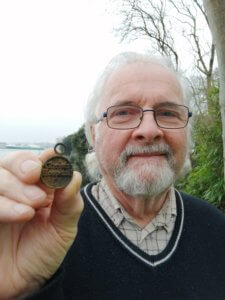 ‘What Brian found in his garden is a ‘leave ticket’, which was greatly treasured by Christ’s Hospital pupils in its day, as it entitled them to leave the school premises in Newgate Street, London, for half a day, or sometimes a day,’ explained Mike Barford from Christ’s Hospital Museum. ‘A pupil who was granted a leave ticket wore it suspended from a buttonhole in their coat; if they were caught outside the school without a leave ticket, they would be in serious trouble!’

‘To appreciate why it was so treasured, it helps to know that pupils were not allowed to go home even in the holidays and had to stay in the school 365 nights a year for the seven years they were usually at school for’, said Mr Barford. ‘A leave ticket was therefore the only opportunity to escape the school for a while.’ Of course, things are very different these days and pupils at Christ’s Hospital can go home for leave weekends, half terms and main school holidays. The school has also since moved to Sussex, near Horsham.

This type of circular leave ticket was replaced by a triangular shaped one in 1729 after a further 500 tickets made in 1720 had all been lost.  It is thought that pupils might have purposefully ‘lost’ their tickets in a place where they could be found and re-used again and again, hence the new shape of ticket being introduced to render the old, round ones worthless.

‘I’m delighted to discover the story behind the curious little medallion I dug up in the garden – the school’s museum and records must be top notch’, said Mr Sellick. ‘I am blown away by everything about Christ’s Hospital; what an amazing place for youngsters to be able to learn and develop their skills.’

‘I have been puzzling how the leave ticket may have got in our garden’, said Mr Sellick. ‘As the area borders the river Tamar, where there is a history of seafaring, it could well have been lost by ancient seafarers when coming ashore. I have found several other artefacts including a marble bottle stopper, clay pipes and other items of interest from the past.’

Interestingly, Christ’s Hospital Museum had the same query a few years ago from a lady in Portugal who had found a 1703 leave ticket in a flea market in Porto! Although we may never know exactly how the leave ticket came to be in a Cornish garden, or a Portuguese flea market, we can’t wait to see where one will turn up next! 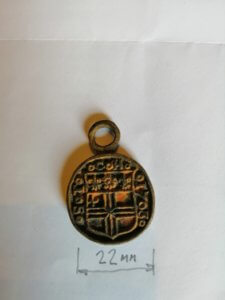