History of the Uniform

Home > About CH > History of the Uniform
About CH

The history of the most famous school uniform in the world. The Christ’s Hospital uniform is of course, just one of the many fascinating aspects of Christ’s Hospital, with which it has been associated from its earliest days. The instantly recognisable uniform is possibly the oldest in existence, and has hardly altered since Tudor times. It consists of a long blue coat, belted at the waist, worn with matching knee breeches, yellow socks and white neck bands. The girls wear the same coat, but with matching skirt. The uniform is provided to all pupils free of charge. 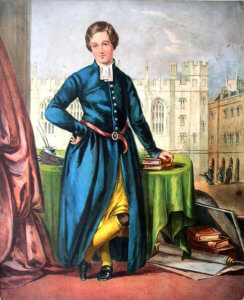 The uniform is one of the School’s most public and enduring features. It is remarkable that in this age of rapidly-changing fashions, the outer long blue coat and distinctive yellow socks have remained virtually unchanged for over 460 years.

When the School was founded over four and a half centuries ago, the City of London gathered up ‘fatherless and poor children’ and cared for them. Through the generosity of the citizens of London smart new clothes were provided for the children of Christ’s Hospital.

The early uniform was, in accordance with Tudor style, very colourful. There has been much speculation as to why blue and yellow was chosen. It was thought that both these colour dyes were not expensive, and blue and yellow could also have been chosen to distinguish the children in the care of Christ’s Hospital from those attending other schools. The linings of the coats were dyed yellow and their ‘stockings’ were always knee length and also dyed yellow.

The buttons on the long blue coat depict the head of the School’s founder, King Edward VI and were introduced a little over 200 years ago. Large silver buttons and velvet cuffs are the mark of a Grecian (Sixth Form pupil) who, in his or her final year, has demonstrated outstanding academic performance in more than one subject.

If there has been one element of variety, it has been in the individual’s choice of footwear, and for many of the pupils at Christ’s Hospital, Dr. Martens have, since 1987, been the perfect accompaniment to the Tudor uniform. 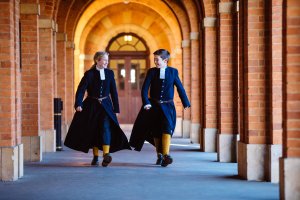 The distinctive uniform of Christ’s Hospital continues to be provided free to all pupils, who all wear the outer blue coat, breeches (boys), pleated skirts (girls), white shirt with ‘bands’, yellow socks (for all boys and junior girls) and leather belts.