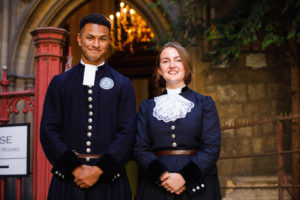 I joined in 2013 – nervously arriving in Maine B’s dayroom. Although my family is very familiar with the school and so I had grown up with anecdotes from CH, the reality is that I had only ever lived in South London. Therefore, coming to the school was intimidating, but recognising that all other Second Form were in the same boat quickly relaxed me. I felt lucky to have become a member of this community homed in huge buildings and built on opportunity. I was less grateful for the Saturday lessons – certainly something I had to adapt to!

Like most people at school, I have been part of many different sport and extra-curricular groups throughout my time at CH. I particularly enjoyed playing hockey, being a Corporal RAF cadet, the Duke of Edinburgh expeditions and being a bass-drummer in the marching band. Though, my favourite activity has to be Model United Nations (MUN). It taught me how to articulate argument and subsequently gave me confidence, whilst also giving me some great friends. I was the Secretary-General (‘captain’) of the MUN team last year, something I am really proud of. 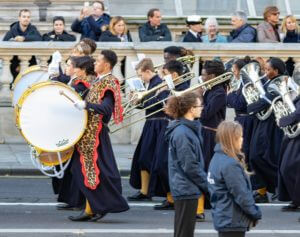 I liked the breadth of GCSEs, studying languages, sciences and humanities altogether (achieving 8A*s and 2As in the final exams). For the A-Level years, I studied History, Spanish and Economics – which I enjoyed. Spanish was phenomenal. I never want to lose the ability to speak it. There is a real autonomy as a Dep or Grecian, an independence in navigating studies which was actually quite stimulating.

My great grandad was the Senior Grecian of 1944 and my aunt was the Senior Grecian of 2006. I don’t think the school remembered or knew this prior to appointing me and so I promise that there was no nepotism involved! My year with the role has been incredible – I have loved every moment of it. The duties are extremely diverse, probably more diverse than anyone would think. Around school, I had to organise the Monitors’ rota and ensure that Dining Hall meals and marching parade ran smoothly. More generally, I worked with Rose (Second Monitor) to implement as many of our ideas as possible – ultimately to improve CH, speaking with and listening to the other pupils. We very frequently had to go to London too, typically to represent the school at traditional ceremonies, luncheons and dinners. I learned so much about our link to the City of London Corporation through Livery Company events. My proudest moment was either my reading for St. Matthew’s Day or my last speech to my year-group before we had to leave.

I will go on to study Politics at UCL. CH was crucial in getting me to this point. The role it played was indispensable. My alternative to CH would probably not have seen me in any similar position. Academically, it gave me the skills but also facilitated my discovery of what interests me, via the activities I mentioned earlier. It has also encouraged my confidence and made me even more ambitious!

It is difficult to specify any one thing on its own because I suppose what I will miss most is an amalgamation of all the small things around CH. The easiest way for me to summarise it would be in saying I will just miss the community overall. It was home for seven years and I know it like the back of my hand, so detaching from it (especially given how sudden and abrupt our departure was) will be tough. In terms of memories, discos and my trip to Kenya stand out. The summer term rituals – thinking of Beating Retreat, Grecians Ball parade etc. – were all things I loved going to and so it is a shame that this year we missed out. However, I reckon some of my memories at CH are still yet to be made because I know that in some way my year group and I will return!