I joined in Third Form/Year 8, which is unusual. I had just moved to London from Dubai as my dad works for the Foreign Office. I hadn’t visited the School before, aside from when I sat the entrance exams. I didn’t know anything about Christ’s Hospital, other than that pupils wore a strange coat with yellow socks. I remember my mum showing me pictures and my reaction was, ‘There’s no way I’m going there!’

Now, I love the uniform, as it captivates people. At my previous school in Dubai, I gave a presentation about CH and they all had questions about it. During lockdown, we all wore regular clothes and towards 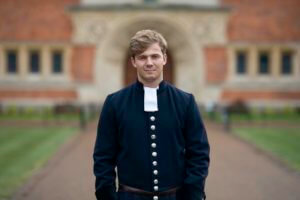 the end people were asking if we needed to go back to wearing Housey. But as soon as it returned, nobody complained, as it promotes a sense of community.

Because of Covid, we haven’t been able to hold all the big events in their usual format. On St Matthew’s Day, we would normally march in the City and be cheered by large crowds. But this year, we held it at the School. Speech Day is another significant occasion, especially for me in my role as Second Monitor (Deputy Head Pupil). We were able to hold a pared down version with a service in Chapel and the annual tradition of March Past.

Sports have been important to me. I’ve been swimming captain since GE/Year 11, enjoyed rugby too, and was Second-in-Command at CCF. I tried out for rugby without much confidence and was put in the B team initially. At the beginning of the year, we played a friendly against the A team and I managed to score three tries! I’ve not done that since, but that performance earned me some respect and ensured I was promoted to the 1st XV. It also gave me a huge confidence boost, as I was playing with people mostly in the year above and really enjoyed the team camaraderie.

In Dubai, it seems everyone is a VIP, but it’s very different at CH. The pupils are grounded and there’s nothing pompous about the School. When you put on Housey, everyone’s equal and that is what I will take away from my time here. The diversity at CH gives you a better understanding of the real world, as you meet people from all walks of life.

I’m going to Oxford to study Economics and Management. I don’t think I’ll follow in my father’s footsteps though, as it’s hard to see the results of diplomacy work. I’m thinking of working for an NGO as an economist or analyst, but a lot can change in a few years!