I first visited the School on an Open Day when I was nine, as my older sister came to CH too. I also came to one of the Parents Days and remember falling in love with the whole place. It’s such a wonderful environment with beautiful green spaces and architecture. I grew up in West London and when I come to CH, it feels like an escape from the stress of city life. 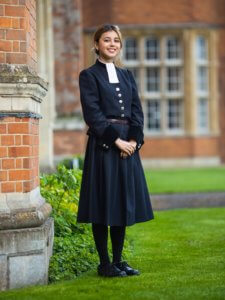 One aspect of the School that is special is that it brings people of different backgrounds and cultures together. I was born in Japan and although my family moved to London when I was two, I still feel a strong connection as my mum always encouraged me to embrace Japanese culture. I still have relatives in Japan and have visited many times.

Art is a life-long passion. It’s what I loved at nursery and I was winning art competitions at primary school. It’s been a constant in my life. So, I’ve been practically attached to Art School for seven years and the staff have seen far too much of me! They helped me in countless ways and that’s something I’ll always be grateful for. The support they’ve given me – from supplying materials to their constant inspiration – has been beyond anything I would have received elsewhere. If anything, my love of art has been enhanced and in my free time, I still pick up my paintbrush. There’s nothing more satisfying than people seeing a finished piece and saying complimentary things. When art pays off, it’s the best feeling in the world.

One of my pieces was selected for the Royal Academy’s Young Artists’ Summer Show in 2021. It was a clay work of an oyster shell which the Art Department submitted. The shell follows the theme of Wabi-sabi, which I could relate to as it’s a traditional Japanese aesthetic. Wabi-sabi is about finding beauty in the imperfect. I chose an oyster shell as my principal motif, as they are perceived as ugly because of their organic nature, yet if you study one, it has a complex and beautiful structure.

I am going to University College London to study Comparative Literature, as I’ve also enjoyed languages. I would like to convert my studies into a career in politics or law. Humanitarian issues interest me as I’ve been Secretary-General for the Model United Nations (MUN). I used to be quite ignorant of humanitarian issues, but MUN offers real insight. Being a part of MUN and competing against other schools in debates has been fun, as there’s a degree of passive aggression. Even though there’s mutual respect, you attack their opinions and I feel that experience will stand me in good stead!

Being involved in clubs, societies or groups helps you create a network of friends from across different year groups. I don’t think that’s the case at most schools, but there’s a wonderful cohesion at CH. That benefits all the pupils and for me that’s why it’s been a great social experience as well as a great academic one.