History of the School

Home > About CH > History of the School
About CH

Christ’s Hospital’s History, one of the oldest boarding schools in England 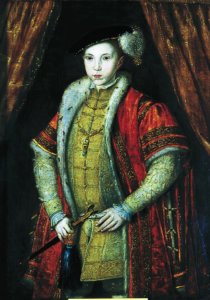 In 1552, the young King Edward VI responded to an impassioned sermon on the needs of London’s poor, and summoned the preacher, the Bishop of London, to talk more about this pressing situation. It was suggested that Edward should write to the Lord Mayor of London, to set in motion charitable measures to help the poor.

Christ’s Hospital was consequently founded in the old buildings vacated by the Grey Friars in Newgate Street, London and provided food, clothing, lodging and learning for fatherless children and other poor men’s children. The children were not only cared for but prepared for future careers. Money for such reform was raised by the City of London. The Church, businesses and householders in London were asked for donations. Governors were elected to serve the school and in November 1552, Christ’s Hospital opened its doors to 380 pupils. Within a year, the number had increased to over 500.

King Edward VI became patron and founder and a Royal Charter was signed to this effect by Edward just eleven days before his death in 1553.

Many children, including 100 of the first 380, were infants who were sent away to Ware, Hoddesdon or Hertford to be looked after by nurses, who were paid a weekly allowance, and to attend local day schools. When they reached 10 they would return to London to be educated.

Girls were admitted from the beginning, and in 1563, when the first children’s register was compiled, there were 132 girls out of 396 children, although the proportion thereafter was usually smaller.

In London, the great majority of children were educated in the Writing School for a position in commerce or trade, leaving when aged 15. The few who stayed on beyond the age of 15 studied either in the Grammar School for University or, from its foundation in 1673, in the Royal Mathematical School (RMS) for service at sea. The RMS received its Royal Charter from Charles II, with Samuel Pepys, Sir Isaac Newton and Sir John Flamsteed being influential figures in its early years.

CH lost 32 children in the Great Plague of 1665, but did not lose any children to the Great Fire in 1666, although most of the buildings were burned down. With only a few children able to return to the ruined buildings, many were sent out to be billeted in Hertfordshire. In 1682 a site in Hertford was acquired for a self-contained boarding school, which CH was to own for over 300 years. 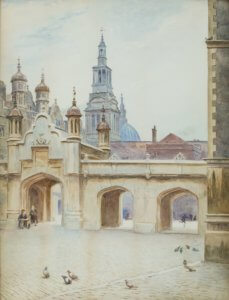 Thanks to the great generosity of benefactors, the rebuilding of the school in London after the Great Fire was completed in 1705, with Sir Christopher Wren designing the South front as well as Christ Church, the parish church immediately outside the walls of CH, which the school used for its worship.  A second major rebuilding took place from 1793 to 1836, including a Grammar School completed in 1793, a new Great Hall in 1829, Grammar and Mathematical Schools in 1834 and the cloisters known as the Grecians Cloister in 1836.  The bordering watercolour, by Arthur Ellis, shows the 1836 Grecians Cloister, the central arch of which was brought to Horsham and now forms the outside halves of the archways to the main quadrangle.  In the background are the two Wren spires of Christ Church and St Paul’s.

In 1902 all the boys from both the London and Hertford schools transferred to a new site in Horsham, and the school at Hertford became a girls-only school. In 1985 the Hertford site was closed and the girls transferred to Horsham, once again to form a co-educational school.

Today CH has 830 boarding pupils, with an equal number of boys and girls, and 70 day pupils.