Jon died at the Garden House Hospice, Letchworth, Hertfordshire on 6th July 2022 following a short illness. He was born in Dorking, Surrey in September 1962 to a farming family. He was the third child of four; 2 brothers and 2 sisters. There was a family tradition of attending Christ’s Hospital- he was preceded by his father, David, Uncle Peter and overlapped with his older brother, Richard. He was then later followed by his niece, Katie.

Jon enjoyed his time at Christ’s Hospital, getting involved in playing rugby and going on many outdoor trips to the Lake District and other UK locations. This love of the outdoors and gratitude for the sponsorship he received, carried forward into his adult life.

He studied Mechanical Engineering at Loughborough University, where he also met his wife, Carol. They married in 1986 and settled in Stevenage, Hertfordshire. He had a successful career working first for British Aerospace which then changed hands several times, latterly being Airbus Ltd. He had a passion for getting the best designed product and worked across the UK, France and Germany in his role as a Chartered Engineer and technical expert.

His early enthusiasm for the outdoors led to a life spent travelling to far flung places including Nepal, Ethiopia and 2 weeks on a deserted island in Greenland. Holidays were spent walking, skiing and cycling in the UK and many different countries. In 2017 he became involved in a Hertfordshire based charity, The Red Rubber Ball Foundation, working to provide secondary education opportunities for children in Kenya. This led to 2 trips to the country and a 50-day charity walk in 2019 in the Alps to raise funds. His fundraising gave 8 children direct sponsorship and also part contributed to 2 others.

Jon lived his life to the fullest and successfully overcame an early diagnosis of bowel cancer in his late 20’s. Late diagnosis of pancreatic cancer this year cut short his life. He could have had more years in his life however could not have had more life in his years.

His enthusiasm and kindness will be much missed by his wife, family, many friends and work colleagues. 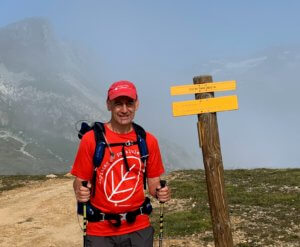