Peter was born in Kolkata, India in 1932. When his father died, he moved back to England, attended CH and the Thames Nautical Training College aboard HMS Worcester. Then he joined P&O as a navigating officer. Already fascinated by square-rigged sailing ships, he left P&O in 1957 and signed up for something completely different.

Peter was 25 years old when he volunteered as a mariner aboard Mayflower II, the full-scale replica of the ship that carried the Pilgrim Fathers to America in 1620. This adventure kick-started a career that turned him into one of the world’s leading naval historians.

He sailed 4,000 miles in 54 days, landing in Plymouth, Massachusetts on June 13th, 1957. The experience taught Peter to appreciate the hardships the Pilgrims must have endured. As he told me: “There were just 30 of us stinking below. I couldn’t imagine what it would have been like with another 100 men, women and children aboard.”

On the journey, he had learned the skills required to sail a square-rigger, enjoyed swimming in mid-Atlantic while becalmed, and overcame his fear of being aloft. As Peter told me: “I found it quite exhilarating up there swaying wildly, hanging on to the best available rope with the wind whistling about your face and clothes.” When not on watch, Peter made pencil drawings of the tiny ship’s complex rigging and sails, later publishing the sketches in Mayflower II Diary: Sketches from a Lost Age (2019).

The 1957 voyage was the subject of Peter’s first book, The Sea is a Magic Carpet. But it was his second book that triggered controversy. After living in the US and the British Solomon Islands, he wrote The Titanic and the Californian (1965). In it, he argued that the captain of The Californian, blamed for not rescuing passengers from the sinking Titanic, had been unfairly pilloried by the Board of Trade Inquiry. Establishing his reputation as a historian and biographer, Peter went on to write a score of naval histories, as well as four naval adventure novels. His energetic style helped him climb the best-seller lists; his thorough research helped him win awards, with reviewers praising “his grippingly readable books”.

The subjects ranged from the Spanish Armada to the naval armaments race before the First World War, and from naval gunnery tactics to the history of iron-clad battleships. Many argue that his major contributions explored how naval power shaped the modern world. And his forensic biographies of Nazi leaders are still contentious: Hess: Flight for the Führer (1991) and Hess, Hitler and Churchill: the real turning point of the Second World War (2013).

“The most reviewed of my books,” he told me, “is War Beneath the Sea. Other popular ones are Battleship, the complete history of battleships, The Titanic and the Californian and Rule Britannia. I am particularly proud of the Maritime Supremacy trilogy: Maritime Supremacy, Maritime Power, and Maritime Dominion.” This three-volume history was awarded the prestigious Mountbatten Maritime Prize in 2003. Professor James R Holmes of the US Naval War College listed Maritime Supremacy in his all-time top ten books about the sea.

One of the last surviving members of the 1957 Mayflower II crew, Peter reckoned that all his success dated back to signing up for that adventure. As the 400th anniversary of the Pilgrim Fathers’ voyage approached in 2020, Peter told Associated Press: “I think the voyage changed my life because the crew was so varied. I met so many different people who did different things,” he said. “I realized after that, that I didn’t have to continue in P&O, up the ladder, to wherever I got to. That I could do what I wanted. It sort of turned me from someone who was going on a certain path to someone who thought he could do anything.”

When he married Jane in 1960, he gave up his globetrotting and settled in Woodbridge, Suffolk. As his son Guy writes, he never gave up his love of the sea. “He bought a gaff-rigged 1900 Norfolk shrimper replica which he sailed with his children on the river Deben until all left home.” Peter loved to holiday in Switzerland, cross-country skiing in winter and rambling across the flower and butterfly-filled meadows in summer.

Away from his writing, Peter was a committed vegan, totally opposed to intensive animal farming. Politically, he was a passionate Brexiteer, arguing against Britain joining the European Union in his book Maritime Dominion.

After his wife, Jane, died in 2018, Peter created a memorial garden as a tribute. As Guy says: “He was just inexhaustibly creative, he was always writing, creating, making things. He could never sit down and relax. The last few years had been incredibly difficult for him because he had been unable to do the things he wanted to do.” Peter died at home on Monday, March 14, surrounded by his family. He was 89 and is survived by his children, Guy, Deborah and Fiona, and two grandchildren. 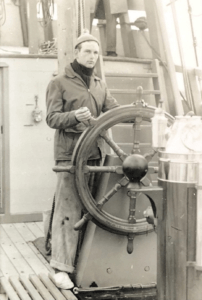