Robert Ashe spent most of his working life living out his commitment to helping others. For his relief work with refugees on the Thai-Cambodian border, setting up what became known as the Landbridge, he was awarded the Thai Red Cross Medal of Merit and an MBE in the Queen’s Birthday Honours in 1980. Later, as the Regional Representative for the United Nations High Commissioner for Refugees in Indonesia, he was well placed to assist the victims of the disastrous tsunami of 2004.  In retirement on the island of Lombok, he continued supporting others, most notably after the 2018 earthquake which caused extensive damage across Lombok.

The son and grandson of refugees, Robert’s remarkable legacy is to be found, not only in his family, but in the lives of countless refugees and others whom he helped.

More details of his life may be read in the obituary published by The Guardian at https://www.theguardian.com/world/2022/apr/03/robert-ashe-obituary . 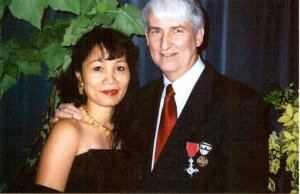 Robert and his wife, Aam